"I followed a fairy troop deep into the night, and when we stopped, I was amazed by an astounding sight." 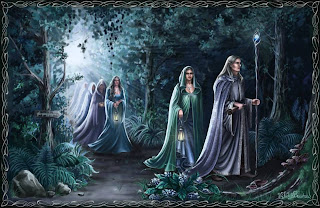 It was a night like any other. The moon was a silky sliver dangling in a sky of midnight blue. Brandon lie down on a bed of leaves, pillowing his head on a log covered with soft green moss. Looking at the stars a prayer escaped his lips.

As Brandon’s eyes grew heavy a faint sound trickled into his ear. His heart leapt into his throat.


“Draco. Draco. We come to you this night. Draco. Draco, bless us with your sight.
It was the unmistakable chant of the fairy troop. They had returned.

Brandon eased up from his forest bed. His intent was to follow them and never return to his mundane life. He had to capture the moon dragon, Draco, and force him to do his bidding.  As he snuck through the forest his mind traveled back to the first time he had followed this elusive fairy troop.
Posted by Jennifer M at 3:00 AM